Our journey in the SelfieApp world is becoming more and more interesting.
Until now, we learned:

What we are learning today

Today we want to do a step forward and make our SelfieApp more sophisticated playing with graphic filters. We want to take a picture, let the user add a secondary visual effect choosing from a filter library, then save or selfie to the camera roll. Among hundreds of possible filters available, we want to provide the user with three predefined effects: Comic, Crystallize, and Blur.
Before start reading this new post, be sure you downloaded the Creo project we are going to improve.
This time we'll do some "serious coding" adding something like "twenty-five new lines of code". We are also going to introduce a powerful new Creo class called DataSet, and a new UI control called Carousel. To make the building process as smooth as possible, I want to talk about these two components first.

The Carousel element can be used to display images in a row that the user can navigate by swiping left and right in the iPhone.
We are going to use this UI control to let the user choose what visual effect to apply to the photo he/she just taken.

A DataSet is a collection of data organized in rows and columns. DataSets can be linked to real data on a database, or they can be filled up with data programmatically. DataSets are a powerful concept in Creo. Many UI controls can be linked to a DataSet at design time, letting Creo do all the magic. In our case, we are going to use a DataSet to store the three visual effects we want to load in a Carousel control.

We are now ready to go.
We want to start the SelfieApp,  calibrate the Saturation parameter through a slider, take a picture, and then open a new Window. This Window will show the photo and a list of visual effects (in a carousel control) we might apply. Let's drop a new Window container (called Window3) onto the Layout panel at the same hierarchical level of TabBar1. This Window is going to show the picture we took from Window1, so it needs to store the captured image in a property. We learned that UI elements can have properties.
Let's define this property in Window3 and call it picture.

Now get back to Camera1 in Window1, and make some changes to its NewImage event. We don't want to save the picture in the camera roll for now, but we want to pass it to Window3 and open that Window as a modal dialog:

Now run the app in the Creo Simulator and push the shooting button to test that everything works fine (you shoot a picture, and an empty Window3 showed up).

How to fill up a DataSet programmatically

We created Window3 and it's still empty. We now want to show the photo preview on it, and let the user select which graphic effect to apply. Let's start.
Drop the ImageView control onto Window3 —  and create ImageView1. Give ImageView1 the same geometry setting you gave to the Camera1 control (both frame and constraints). Now let's bind ImageView1.image property to our photo in Window1.WillShow event.

Rerun the Simulator to check that everything works as planned, and the picture is displayed correctly on Window3.

Note that, the WillShow event is fired every time the control is displayed on the screen.

A class method is a function available directly from the class itself.

Then, create a variable structured like a data set or table, with rows and columns. Each row represents a record within our data set. Let's say we want to have records structured like this:

In this case, we're not going to use the column Name, but we added it to the project to help you understand better.
The resulting WillShow event of Window3 looks like this:

We are finally ready to associate a DataSet object to the Window3 hierarchy, and fill it up with the rows data structure defined above.

Drop DataSet on Window3 from then Controls List, and DataSet1 shows up in the Layout panel.
A DataSets can be configured managing some of its events, in particular:

We're not done yet. There's another DataSet1 event we need to manage. It's called Value and it has to return a cell value given its row and column numbers.
Let's define a property in the DataSet1 object to store the rowsdata structure defined in Window3 (our filter list), and call it data.
The Value event in DataSet1 is like this:

Until now, the DataSet has been created and configured to host the filter-modified pictures data structure. We are pretty close to the end, but there are a few things left before we can add a Carousel control:

The best place to do it is in the WillShow event of  Window3:

Everything is ready to add a Carousel control instance to the project. We are going to position it in the second half of Window3. But it won't be alone. In that area, we need to have another control: a "Save" button.
Remember? We want to select a visual effect and press the Save button to save the photo on the camera roll.

In my previous article, we learn something about Views: they help to group together UI controls with a similar context. This behavior is a perfect case for us because we want both the Carousel and the Button have a black background color and get resized consistently with their parent (the View).

So drop a View from the Controls List onto Window3 (View1), then both a Carousel (Carousel1) and a Button (Button1) onto View1. Set the background color of View1 to black and set all its Autosize constraints except the Top one. Then resize  Carousel1, change its item size to 300x300. Change a few properties of Button1 (color, font size) too.

Now we need to  connect Carousel1 to DataSet1 and that's pretty easy, thanks to the Creo Inspector. Let's look for the DataSet property in the Carousel1 Inspector. Open the DataSet dropdown list and select DataSet1, then set both the Cell properties to Picture (it's the name of the DataSet1 column containing the modified picture), and boom. We can now browse the pictures with different filters applied.  Run the application in the Simulator and check the result.

Here you are, The SelfieApp is now completed!

You can take selfies, define a saturation level, select a visual effect, save the image to the iPhone camera roll, and browse your selfies from the app. How cool is that?

You can download the full SelfieApp project here. Leave your comments below and help us to understand better what you'd like to read next. 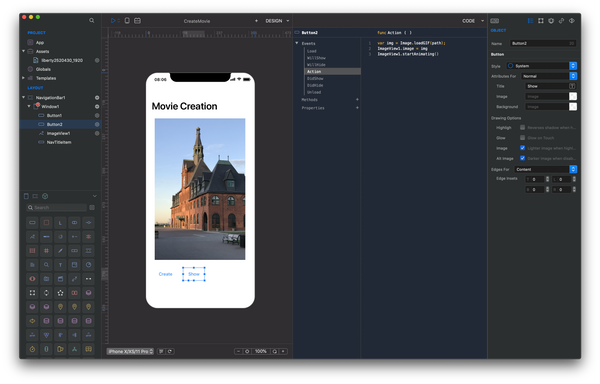 The last time we published a blog post was in September 2019. I was in Palo Alto (CA) at that time, and a lot of things happened in the past months. The world is changed due to Coronavirus and there is, even more, a needs to create software faster and 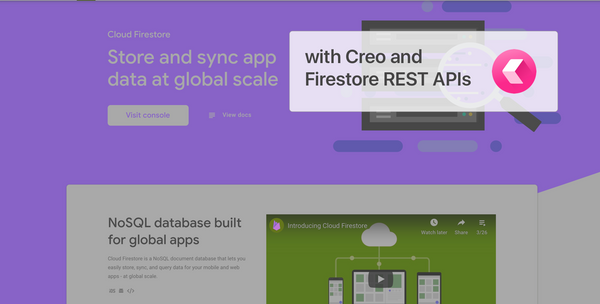 Create an iOS app to authenticate and access a Firebase db, retrieve some data and display them on a table view in minutes. 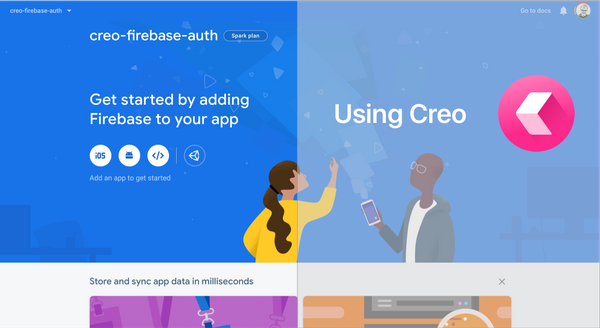 Firebase provides a realtime database and backend as a service. The service provides application developers an API that allows application data to be synchronized across clients and stored on Firebase's cloud. Today we learn how to create an app to login to Firebase with email and password from a Creo